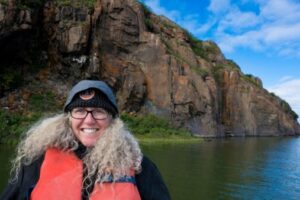 Allison currently serves as a Director on the Board of Tectonic Metals Inc. For the past three years, she has assisted Lucara Diamond Corp. with all ESG matters, and helped build and develop the sustainability department at the Karowe Diamond Mine in Botswana. Previously, Allison served as the Vice President of Sustainability at Kaminak Gold Corp. until it was acquired by Goldcorp in 2016.  As Compliance Specialist at the Ekati Diamond Mine, Allison was part of the team that lead the mine toward ISO 14001 certification. There she started an Environmental Awareness program that included the formation of an Environment Club with participation from all departments at the mine site. As an independent consultant, Allison has worked in Yukon, Nunavut, Northwest Territories, British Columbia, and Alaska.

Allison is amazed by the incredible opportunities that she has been able to be part of and help create. Highlights include, the development of environmental training modules for Yukon First Nations in partnership with the First Nations and Yukon University, the development of the Regional Wealth Creation Fund, the first of its kind, as part of the negotiated Inuit Impact Benefit Agreement with the Kitikmeot Inuit Association in Nunavut and building a sustainability department at the Karowe Diamond Mine with Lucara Botswana.

Allison has served on the board of Yukon Women in Mining as Vice President for four years. She is a founding member of the Yukon University Foundation Board and has served on NWT and Nunavut Chambers of Mines as well as a number of working groups for the PDAC.

Allison was the recipient of these awards: